This trade will not go into the detail explaining position sizing and risk management since it would require a much more detail description of my approach towards these domains.

My approach has in general 4 high-level steps when prepping for the trade. It starts with analyzing what are Top Features that would define Context. When particular Context matches a Context with edge, Play (what) is assigned. Each play has clearly defined criteria. This Play is then traded through Act (How) through the execution types that are either Initiative or Responsive. That, in a nutshell, defines when to trade, what to trade and how to trade. From Features -> Context -> Play -> Act I can devise as much methodical process as possible which is very important to me because it is repeatable and can be categorised and clustered. Down below is a diagram of this progression.

Here is a description of GC Dec 2019 trade. I will not go into the details but basically Top Features has identified that there is a multiday balance zone (strength of 6 inside days, which is reasonably strong to get the breakout energy) at the edge of the weekly edge and daily POL (Pocket of Liquidity) resistance. In the table down below you can see hands-on attributes that has been used to identify Play (third row) which is the most important aspect of the analysis when looking for trades.

Hypothetical Trade Review (should have/would have)

Down below we can see applied pressure on the lower timeframe. This pressure is pushing towards 1485 and creating interesting Global POL (Pocket of Liquidity). Also, a multiday balance is created with multiday inside day starting on 12.12.2019. If you would have played just a breakout with a tight stop, you would be stopped out multiple times. In the chart you can see four opportunities to enter:

Primary Act, in general, would require more risk (extended SL means lower RR) but a higher chance to stay in the trade through whipsaws. Secondary and Tertiary Act would be more aggressive with higher RR.

Here is the view on a more daily and weekly look. You can see the trend and bullish wedge on weekly (top right corner). Bottom left you can see how the balance was created and where POL was created with applied pressure. Bottom right there is a blue circle that nicely describes over how many days we had a contraction. 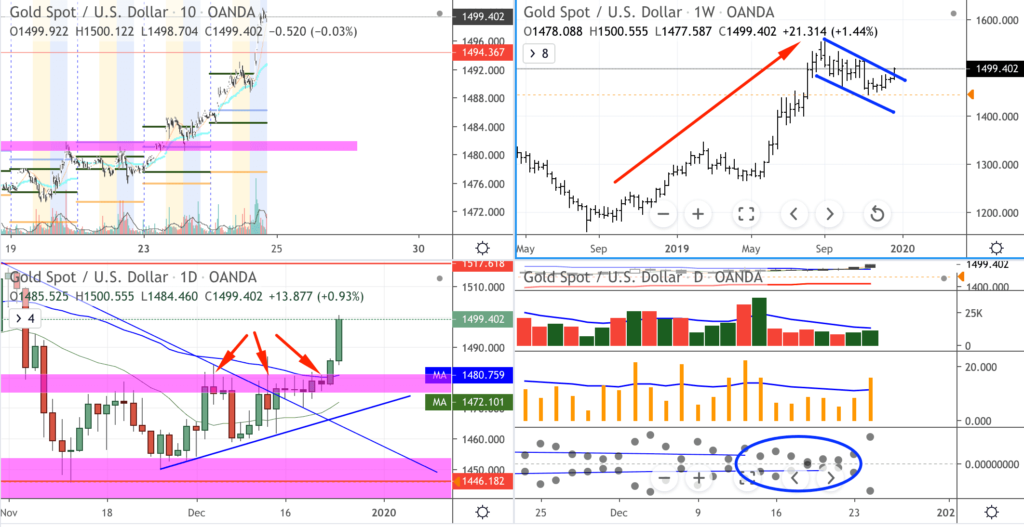 I have been buying breakouts with very tight stops around 1485. This eventually ended with a couple of scratches (2 trades) and one full R loss (1trade). I have played this like a retail rookie but it is important for me to do this retrospective analysis. Of course, the Primary act was not so clear for me at the time of the trade because the trade still could have rolled out and also I was aiming for such a high RR multiple, that the R for Primary Act was a no go (greed).

Looking at what I could have done differently is definitely

These are my three main takeaways for December 2019 GC swing trade analysis. Time to dump them into database 🙂

Have a great day.